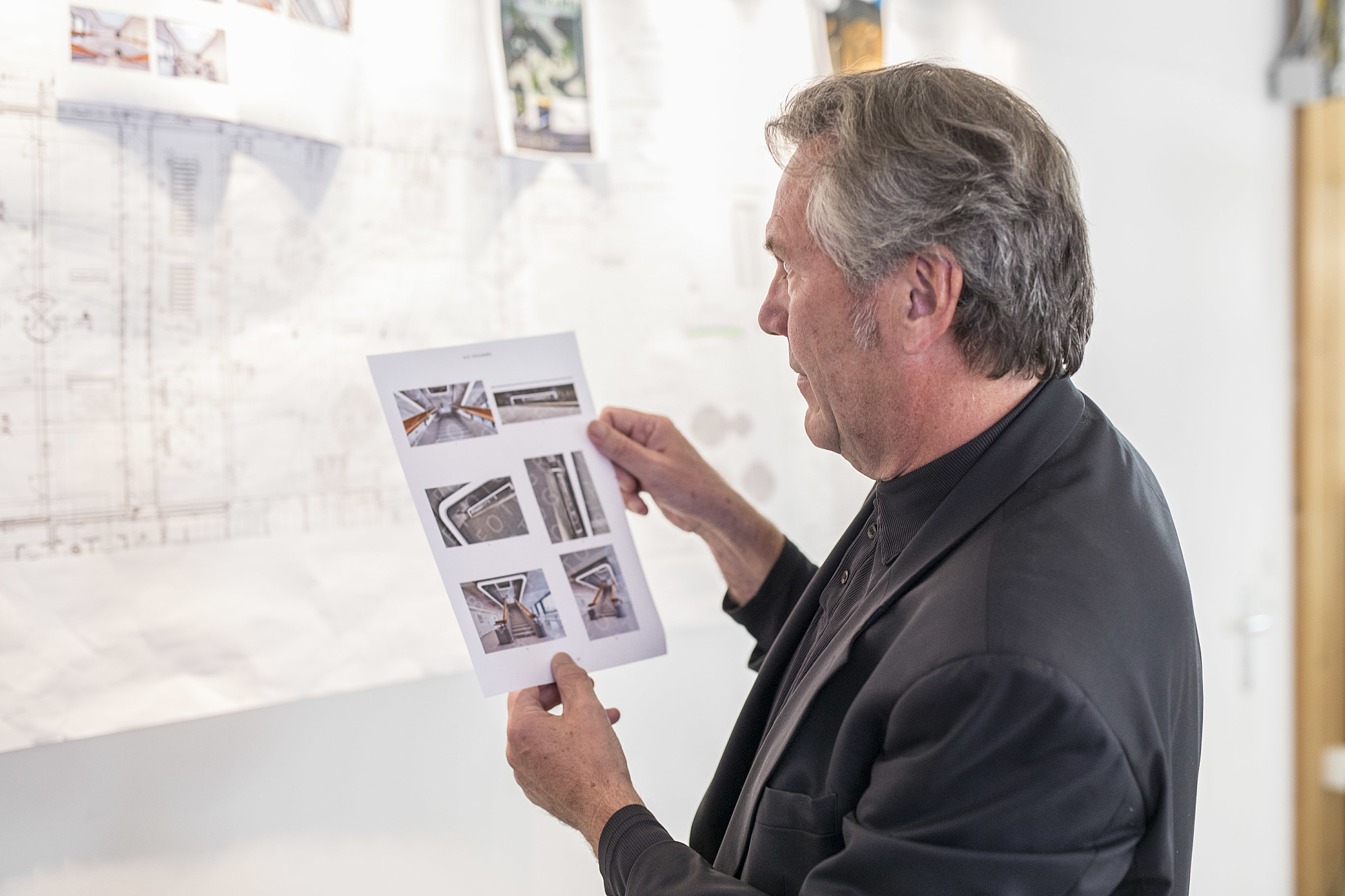 Do you like our luminaires but need other sizes? Do you attach importance to a special control technology? Or do you have an idea but no solution yet?

We find an answer to every question – because many of our products can be modified and because we love the challenge of developing new products.

Below you will find some project examples of various exterior and interior luminaires that we have manufactured according to the planners’ wishes.

The elaborately designed inner courtyard in the new Enervie headquarters building should be perceived as an attractive place even at dusk and in the dark. Furthermore, orientation guides were needed in order to be able to navigate from here to the entrances in the surrounding building complex. A concept for a floor decor with organic shapes that were to be traced by lines of light served as the specification.

The planned design featured shapes with radii of varying sizes: They are contoured by light lines set flush into the floor. ADO Lights installed a total of 120 metres of these and thus created the basis to effectively underline the intended pattern with its colour-varying floor coverings. To be able to choose the atmosphere freely, the luminaires were equipped with RGB LED modules. Each of the five tracks can be controlled separately via DMX. In this way, it was possible to realise an aesthetic as well as a robust solution that illuminates the inner courtyard atmospherically.

A visual attraction was sought to mark the 900th anniversary of Zwickau. Ideally, it should enrich the cityscape beyond the anniversary phase. The much-frequented old town offered itself as a location. The special challenge was to present the Zwickau city logo as a visual highlight.

In a prominent place, the magic of light and water comes together. The installation stretches across the main market square like a luminous trail, its shape suggesting the contour of the city logo. The eye-catching illumination is provided by coloured LED light lines integrated into stainless steel drainage channels. Linear gratings type KSF cover the channels as permeable protection. Another eye-catcher are nine illuminated water fountains that effectively underline the light band. For this reason, drainage channels were equipped with water nozzles and LED spotlights.

Due to its height of almost 125 metres and its elliptical shape, the office tower has been a landmark of Düsseldorf since the turn of the millennium. When redesigning the forecourt, the facade drainage channels surrounding the building also had to be replaced.

To further emphasise the solitary character of the architecture, the drainage channels were not only renewed, but also equipped with RGB Wallwashers over a length of 38 metres. The “Wallwashers” were set to the colour of the insurance group’s corporate design. The bottom-up lighting sets elegant accents in the entrance area by illuminating the canopy in warm light. On special events – when a different scenery is desired – the programming can be varied.

For the foyer of the Textilakademie NRW Mönchengladbach, ADO Lights succeeded in combining lighting and acoustic insulation measures. On 51 metres, the Linargo BL LED was integrated into baffle elements hanging from the ceiling. This means that the entrance area has sufficient light at all times of the day. At the same time, reverberation time and noise levels got reduced.

The Elektroinnung Düsseldorf showroom was to be elegantly illuminated. Furthermore, it was about presenting products there in the best possible way. As a simple, aesthetic solution, the Linargo LED was chosen as a recessed version. At selected points, LED Linargo was combined with LED Luc Spotlights: For this purpose, the LED Luc Spotlights were additionally integrated into the profile of the LED Linargo. The two lights can be activated together or separately.

An individual illumination of the workplaces was required by sop Architekten, Düsseldorf. As a filigree pendant luminaire, the LED Linargo was manufactured according to the specified table dimensions of 1690 or 3370 millimetres. Users can choose between direct and indirect light, the options can be switched separately. In both cases, the light can be dimmed.

The focus is on the performance history of the Bayreuth Festival: the exhibition space is located in the basement of a new building, the floor is black terrazzo and the ceiling is also black. In this special ambience, the exhibits – historical stage models, costumes from different decades and stage equipment – had to be appropriately staged.

An optimal presentation of the artefacts was achieved by LED Luc: 219 pieces of these magnetic MiniSpots are each the centrepiece of a custom-made round recessed ceiling housing by ADO Lights, which blends inconspicuously into the surroundings. This design includes an internal adjustable tongue to individually attach the magnetic spots. The housing is made of steel ST 37 and is black or white powder-coated according to RAL. Interchangeable lenses of 50°, 25° and 10° allow the user to adjust the illumination to the individual exhibit.

The designer and curator could choose between honeycomb attachments and conical attachments for glare control, which can also be used to direct the light.

Historic wall paintings in the Heldensaal should be illuminated gently, without UV light and in the best possible way, without being visible and without distracting the viewers’ gaze. Interventions in the building structure, for example on ceilings and walls, were to be avoided.

Not visible to visitors – because they are facing away from them – LED Luc MiniSpots were integrated into metal visitor barriers. This solution has a double function: the paintings are effectively protected and at the same time homogeneously illuminated in warm white. 180 spots were installed over a total of 30 metres. Another custom-made piece is the stele, in which LED Luc is also integrated: its light falls on a historical armchair.

During the day, the monolithic, shiny black building appears restrained among the partly colourful, partly exalted buildings in Düsseldorf’s trendy Medienhafen. But at night, light and colour suddenly come into play.

So our task was to develop a lighting concept for the building from the inside, which, when viewed from the outside, is reminiscent of light art.

For this purpose, the convector shafts behind the glass façade were covered with homogeneous TTC linear gratings, which correspond to the covers of the external façade gutters over all floors, and were also combined with LED ConLights. The luminaire inserts, mounted flush between the linear gratings at each of the façade joints, are each equipped with three LEDs in RGB and covered with glass so that they can be walked on.

Furthermore, the staircase provides a special appearance from the outside due to the Lightlines attached to the flights of stairs.

This website uses cookies to improve your experience while you navigate through the website. Out of these, the cookies that are categorized as necessary are stored on your browser as they are essential for the working of basic functionalities of the website. We also use third-party cookies that help us analyze and understand how you use this website. These cookies will be stored in your browser only with your consent. You also have the option to opt-out of these cookies. But opting out of some of these cookies may affect your browsing experience.
Necessary Always Enabled
Necessary cookies are absolutely essential for the website to function properly. This category only includes cookies that ensures basic functionalities and security features of the website. These cookies do not store any personal information.
Non-necessary
SAVE & ACCEPT